Photo: Lori Van Buren/Times Union
At 5:30 AM, on August 29, 2013, a fast moving fire started in the basement food storage room.

At 6 AM, a neighbor called 911 and Albany firefighters rushed to the building in an effort to save our beloved Center.

​Everything we built was gone in the matter of 45 minutes.
No one was hurt, for which we will be forever thankful.

The fire occurred almost exactly 15 years after we first purchased the building in September 1998. Our mortgage was paid off in December 2012.

Funding to provide the down payment and six months
​operating costs in 1998 was provided by the Community AIDS Partnership through funds raised from the AIDSWalk.
Fire investigators were unable to pinpoint the exact cause of the fire, though they found it started in the basement food storage room. The fire was not considered suspicious as the security cameras did not record any illegal activity.

The building, built in 1900, was home to Family & Children’s Services for close to 30 years prior our purchasing the building. As we toured the building later that day, there was one picture that survived, when all around it had burned. The picture of Father Damien, that hung at the Damien Center since 1990, hung crooked on the wall. His face peered unscathed from the broken glass, sending us a message that all was not lost and we would survive this tragedy.

That morning, we quickly relocated into space around the corner at The First Lutheran Church of Albany. We served lunch in the church that day as the Damien Center continued to smolder. With the strong support of our community, we got back on our feet and continued all of our services at the space we are now renting at the church.​ 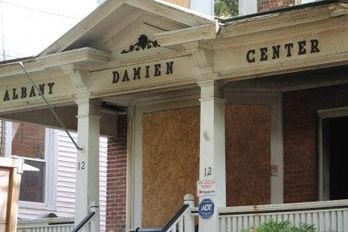 Photo: Jackson Wang/The Saint Rose Chronicle
Next: Our Vision for the Future
- or -
YES, I WANT TO HELP

“Our passion are the true phoenixes; when the old one is burnt out, a new one rises from its ashes.”
Johann Wolfgang von Goethe [1749-1832]