"PAWS has been amazing, they care deeply not only for my boys but for me also."
If you're inspired to support PAWS please consider joining the Honorary Committee.
We need twelve more people to join!
Join the Honorary Committee Today
When you do you'll be helping people like Miss Ashleigh and her "babies" stay together. 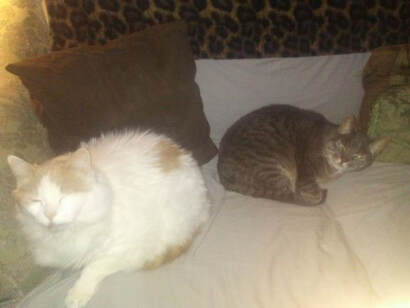 Miss Ashleigh decided in 2010 to attend the Harley Davidson Rendezvous not aware that her future children were waiting for her there.

Harley and Monk were just barely two months old and traveled to the Harley Rendezvous in an RV with my brother.

My husband worked security at the Rendezvous and my brother was in charge of parking. He brought them because he knew he would find them a loving home with someone in attendance because bikers are child and animal lovers.

I didn’t know they were coming, but when I saw them I knew they belonged with me. I fell in love at first sight, they instantly became my babies and I’m blessed to have them.

Harley was named after Harley Davidson bikes and Monk after my nieces favorite TV show Monk.

PAWS has been amazing, they care deeply not only for my boys but me also. I tell everyone who is in need to  call PAWS because they will do  everything in their power to help them and because of PAWS, I’m able to take better care of myself.

Food and Vet visits are very expensive, but I can rest easy knowing that some of the financial burden is lifted, I can eat better and pay bills. We love them and are so grateful for this program.
Join the Honorary Committee Today
Honorary Committee (as of 3-9-22)